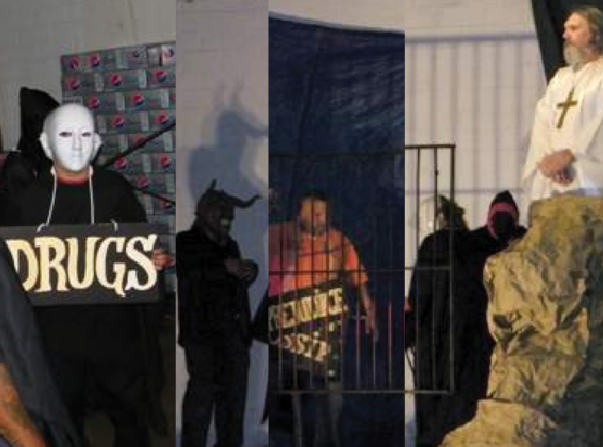 The Drama of a Westside Pastor

In 2005, Jimmy Robles attended a Westside A.C.T.S. Men’s Retreat through San Juan De Los Lagos Church. At this 4 day retreat, he encountered God in drama that changed his life forever. By the end of the retreat, he turned his life over to God and was convicted of his old sinful life of selling drugs and became a new person with a strong desire to serve God. Not even a month into his salvation, he gave way to act on a vision that God had placed in his heart. He would minister through a drama based loosely on his life story.

A 26 page script was written in a week and 3 months later he had a cast of 44 teenagers and adults ready to go on the road. The drama was called “A Second Chance” and was first performed on April 2006 at the YWCA gym on Castroville Road in San Antonio, Texas with over 600 in attendance. With the success of his first production, the drama was repeated each month all over Texas for the next 3 years.

In May 2006, passing through a vacant dirt lot on the corner of Zarzamora & Poplar Street, he was moved to set up an outreach ministry on the vacant lot that was across the street from an empty bail bonds building. With a table and a couple of chairs and a sign that said, “Do You Need a Hug or Prayer”, he started to reach out to the community. Surrounded by prostitutes, gangs, addicts and the homeless, he served coffee along with something to eat. Every Saturday he continued to setup the outreach ministry in the vacant lot and minister to all who would come.

The outreach ministry continued in this vacant lot for 3 years. Seeing a vision and a calling to continue to minister to the needs of the Westside community, God directed Pastor Jimmy Robles to the empty bail bonds building across the street.

In 2012, Pastor Robles was blessed with a new location. LCM took over the Attorney General Office for Child Support and Food Stamps, which was abandoned when the city downsized. These two buildings, one 10,000 and the other 24,000 square feet, became the new home of Last Chance Ministries. They celebrated the 2013 Easter service with over 1,000 in attendance.

This story is made possible by:

“We are so very appreciative of Pastor Jimmy’s friendship during these 12 years. Pastor Jimmy is one of those men that you just have to believe God had him in his hands on from the beginning. He’s been through so much and has overcome even more. Pastor Jimmy’s heart is gigantic, his love for the community is unwavering. And the Westside is his focus. This man has done more for this part of San Antonio, and it’s citizens, than one can understand. And in only 13 years too. I am so honored to be his friend and brother in Christ. His story is life changing. He is like Christ in so many ways.”  Gregg Weston, President.

Faith Happenings Where Hope Comes From