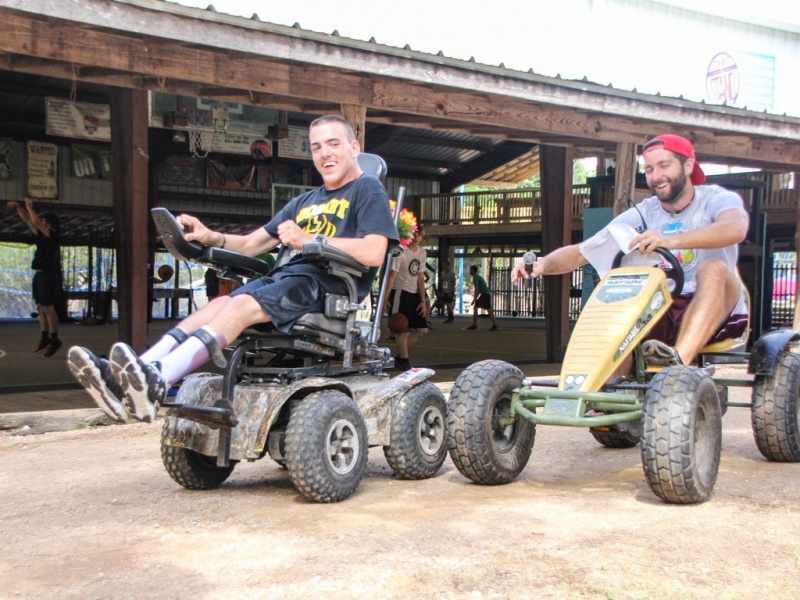 Since 2008, the Believe It Foundation has made a way for children with physical limitations to be included in activities alongside their typical peers. Andrew McAllister, a 31-year-old affected by cerebral palsy since his premature birth, started the non-profit to provide physically challenged children the opportunity to be included in normal childhood activities. The Believe It Foundation arranges for kids to attend Spurs games, UTSA football games, learn to snow ski, ride a bike and participate in the Endeavor Games – an athletic challenge in Oklahoma.

“I enjoyed these experiences and many more,” McAlister said, adding he wanted to share what meant so much to him.

“I felt I needed to break down the barriers so there was no awkwardness between the physically challenged and typical kids,” he said.

The foundation also partners with T Bar M Camps to allow children a life-changing experience as an independent camper. McAllister remembers growing in self-confidence and independence during his time as a camper and counselor there.

“I got to T Bar M (at age 14) and was able to do water skiing and zip lines in a Christ-centered environment,” he said. McAllister was a camper for two years, and then began work as staff. He was inspired to create a program so physically challenged kids could go to camp on a regular basis – a program that has now celebrated its ninth year and sponsors 18 campers each summer.

One of the foundation’s first beneficiaries was 20-year-old Roger Copeland, now a college student at Angelo State University. His mild cerebral palsy doesn’t detract from his position as student coaching assistant with the school’s football team, nor his aspirations to be a coach and athletic director.

“I was always the kid stuck inside while my sister and cousins were out playing,” Copeland said. Attending sports camp at T Bar M at age 12 was the “first time I was able to feel like a normal kid. The Believe It Foundation and T Bar M are very special to me and always will be.

“If it wasn’t for Believe It Foundation, I don’t know where I’d be today,” he added. “It helped me gain the trust that I could have independence.” Like McAllister, Copeland also transitioned from camper to staff and spent seven years associated with the camp.

Copeland also benefits from a college scholarship funded by the Believe It Foundation. He was awarded $2,500 a year for four years, as long as he maintains a 3.0 GPA, which he says can be challenging.

“It’s big deal to me and my family to know I was able to renew that scholarship,” Copeland said.

“My favorite thing is the kids, seeing them grow and the smiles on their faces,” he said. “I try to live my life in accordance with scripture. My goal is to serve people.”