God is not a Democrat nor a Republican 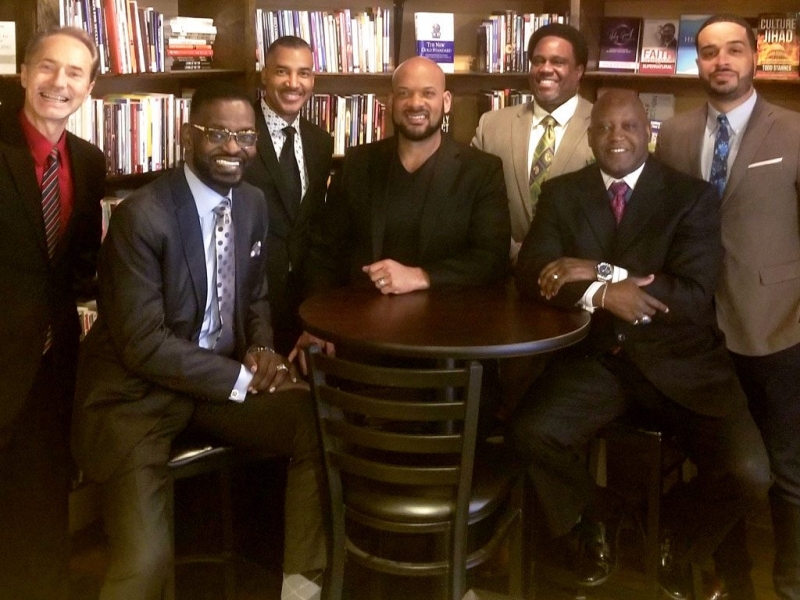 Local leader is one of five men to start a 10-city tour to awaken a nation; tour launches in San Antonio

But—wouldn’t churchgoers attending services where the Bible is preached Sunday after Sunday predictably vote for someone who champions the values of the sacred scriptures?

It gets complicated. Scriptures fall under different interpretations. Emotions ebb and flow. It’s not predictable. And many cast their vote out of tradition while not focusing on the platform of the party and how it compares with biblical values.

Pastor Charles Flowers, one of the five leaders, heads up the San Antonio Black White & Brown initiative. The hope is to influence the upcoming elections in 2020 by making a significant shift toward biblical understanding and sound reasoning when it comes to candidate vetting. It is with this hope they launched with a well-attended rally in his own church—Faith Outreach Center International, where he’s the senior pastor. The rally sparks the start of a 10-city national tour beginning right here in San Antonio, where we’re led by a Democrat mayor and where 64 percent are Hispanic or Latino and 7 percent are black.

“One of the defining phenomena of contemporary American electoral politics is the black electorate’s large and enduring support for the Democrat Party, which has…moved leftward,” says Theodore R. Johnson, a senior fellow at the Brennan Center for Justice for the Washington Post. “Its presidential candidates have received an average of nearly 90 percent of the black vote for the past six decades.”

“I can’t put into words the level of shift that took place in this house last night,” Charles Flowers said to 500+ Facebook viewers during a live chat the day after the rally. “Several very important things were said last night. There is something happening in the black community and the Latino community and in the Asian community. We have been assumed as assets for a particular party: the Democrat Party.”

The five men at the rally unpacked the scriptures alongside issues, which affect a city like San Antonio. They conveyed facts, voting records and anecdotal evidence pointing to a need for careful consideration—and even some changed opinions.

David J. Harris Jr., one of the rally speakers, talked with The Beacon before the rally. He recalled the night in 2008 when Barack Obama was named America’s president, and said that this event brought a lift to so many in the black community who felt marginalized. When it comes to this deep sentiment, David says, “I get that.”

David, an avid online influencer for the David J. Harris Jr. Show continues: “What I don’t side with is letting somebody get away with denigrating the culture that he was supposed to be uplifting…[Obama was] doing virtually nothing for the black community that was so leaning on him to be our modern-day Martin Luther King.”

David goes on to say, “My values do not align me with the Democratic Party. I am 100 percent pro-life because that is what the scriptures say.” (Bernie Sanders recently said, according to nationalreview.com, “I think being pro-choice is an absolutely essential part of being a Democrat.”)

While David is unquestionably conservative, he refuses to deliver harsh judgments or leave compassion out of his message. David’s book, Why I Couldn’t Stay Silent, features a chapter penned by his wife, Jennifer. “If you’re reading this,” she says, “and you’ve had an abortion, there is no judgment here…Go to God if you haven’t already—He’s waiting for you…PLEASE!”

The pro-life and pro-choice debate is one of the key issues the rallies hope to highlight. If you are a reader of The Beacon who supports biblical values, now is the time to start praying for these five men. Pray that they can clearly speak the truth in love to show the way to make voting choices clearer and aligned with scripture.

While the issues are complicated, one thing is clear. Voting is not a party thing. God is not Democrat or Republican. According to Exodus 3:14 He is the ultimate independent, saying, “I Am that I Am.”

Pray. Lift up our nation and intercede for these men to make their message clear and for spiritual protection. Give. Visit the San Antonio Black White & Brown (SABWB) website to give toward this cause. You can become a member and dive into all of these issues more deeply. Visit. Go to www.facebook.com/pastor.flowers.75 where you will find a wealth of information.

Jennie Rosio is an independent professional writer based in San Antonio.