God will make our love enough. 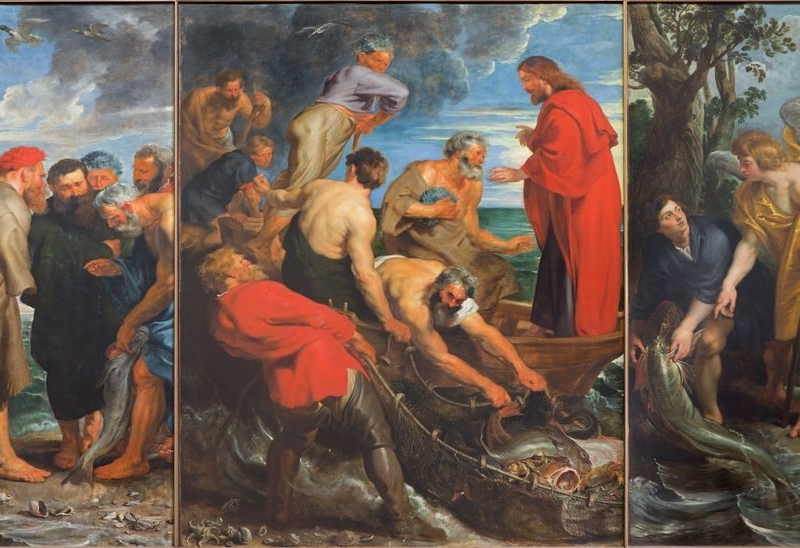 Leslie Leyland Fields is a wonderful study in irony. A New Englander living in Alaska. A poet surrounded by burly fisherman. A gentle soul encircled by the wild waters of the Pacific. A college professor who is equally adept with metaphors and salmon nets. She is a writer, net caster, and above all, a follower of Christ. In her most recent book, Crossing the Waters: Following Jesus through the Storms, the Fish, the Doubt and the Seas, she explores the unique relationship Jesus had with the Sea of Galilee and the twelve men he called to “follow me.” I’m thrilled to run a piece from her book in my blog. You’ll see why it won Christianity Today’s 2017 Book Award in Christian Living/Discipleship. — Max

Jesus is dead. Six of the men have gone fishing. Do you see them out there, laboring all night, with the lights blazing and the two boats coordinating the nets, and haul after haul—nothing? Not a single fish to sell or cook for their own breakfast! Their utter destitution on the water that night is a mirror image of their souls. They have nothing. They can catch nothing. They cannot catch even a minnow on their own. Whatever skills they thought they had are not enough. They remember another night when this happened—three years ago, when it all started. They all think of it, but no one speaks. What’s the point?

Just before morning breaks, just before they give up, a man calls to them from shore (Who is it? Can it be?) Hesitant, they do what he says (nets dropped on the other side—again?), and in one impossible moment their nets are full of the biggest fish they’ve ever seen. Don’t they know this pattern—a man speaks and out of nothing, out of dearth and failure explodes this crazy unending abundance? Peter sees him clearly now. He throws on his clothes and leaps into the sea. This time he thrashes toward the Lord instead of begging him to leave.

All the men are around the fire now. It crackles with a homey warmth on the sand. The food is nearly gone. The fire settles. A plume of smoke follows the wind and hovers over one cluster of men, then another. Then Jesus speaks.

Simon, son of John, do you love me more than these?

Peter startles. Yeshua, sitting on the other side of the embers, looks straight at him. His face is quiet and kind. Simon Peter looks around to see what Yeshua means. He looks at the sea, the boats, his best friends, the fish on the sand waiting to be sold. He blinks, dazed. He knows the truth now. None of this is his. None of this can feed him. Then he looks back. Yes, Lord, you know that I love you, Peter stammers. This is the first time he’s spoken to the Master since that night. He pants with relief.

Yeshua blinks, smiles at him, tilts his head, and asks again, Do you love me?

Peter freezes. Yeshua isn’t asking, “Will you ever turn from me again? Will you ever make a mistake again?” His question is for me as well, because I was there too that night. Do you love me?

But he asks already knowing the answer. He knows Peter’s mind and heart already; he knows my heart already, but Peter, distrusting himself, does not know until it bursts from him.

Lord, you know that I love you! In saying it, Peter knows he does love this now-risen Messiah enough even to die for him. And he will. Simon will die for the name and the sake of Jesus years later. Jesus tells him how he’ll die in another few words. But now, one last time, the only question that matters:

Simon, son of John, do you love me? Jesus asks quietly, in a low voice, with unwavering eyes.

Peter flinches. Why doesn’t Yeshua believe him? Yes, Lord, you know that I love you! He nearly shouts this time. And just as he speaks he hears it. I hear it. Three questions. Three answers. Is it possible? Is it possible that his every denial is now forgiven, covered by love? By Yeshua’s love for him, and incredibly, his own love for Jesus—his own small, limited human love? Our love is enough, then?

Peter would never forget this exchange. He would go on to write to the early church, and to all believers after: “Above all, love each other deeply, because love covers over a multitude of sins.”47

This is the gospel right here, in these words around this fire. Peter is forgiven of his faithlessness, his selfishness, his fear. And I am as well, and every one of us who has ever run away from the one who is our very life. Because this is the truth of following. When he said, “Come, follow after me,” it also meant that he would come after us. We have nothing to offer him. We stumble, we faint, we run the other way, and still he comes after us. He wants us. He loves us. He does not let us go.

But Yeshua is not done. This is not just about us. Every declaration of Peter’s love is met with a charge:

Feed my sheep.
Feed my lambs.
Take care of my sheep.

So, Peter’s love is enough. And this love has work to do out in the world. As we have been fed, as we have been forgiven, let us feed others. Others where? Everywhere. Later Jesus commands, “Go into all the world.”

Can this be? I want to protest, say back to Jesus, Do you know how weak we are, how wavering our faith, how limited our love? Are you really trusting us? How can we do this? And I know the answer has already been given. Through the fish. Through the wine at the wedding. Through the bread on that hillside, and in so many other ways. He is the God who takes whatever we bring to him—our destitution, our tiny faith, our two small fish, our very human love—and multiplies it beyond measure. God will make our love enough.