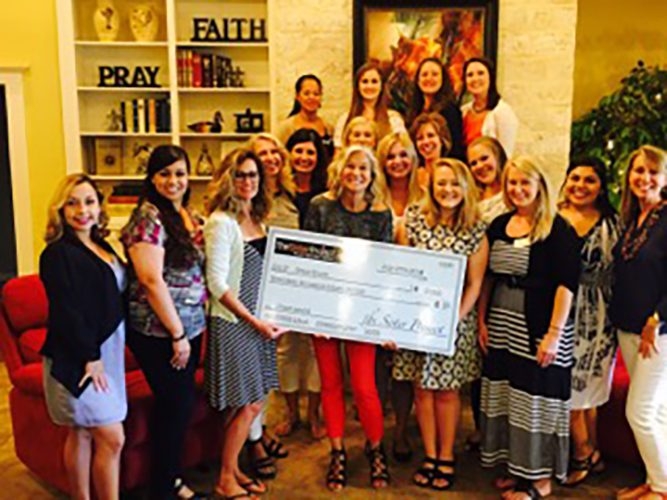 The residents of Grace House, a faith-based transition home for women at risk, were delighted to receive a donation of $17,000 this summer from local funding organization the Sister Project.

The Sister Project is the inspiration of Debbie LeDoux, a former grant-writer at the Bexar County Justice Center. Six years ago she gathered a few friends, including Ellen Yarborough and Carrie Friesenhahn, and founded the non-profit group that invites 100 women to each give $1000. The subsequent sum of $100,000 is then awarded to three selected, deserving causes.

Each application was reviewed and vetted financially by the selection committee. Semi-finalists then were invited to send a day-in-the-life video before winners were chosen by vote. At April’s annual meeting new winners are revealed and the previous year’s top project presents their progress.

“Each year when we gather, we get one story of how our investment has paid off and three stories of opportunity for further kingdom investments. It really is a very a rewarding event,” LeDoux enthused.

Since 2011, The Sister Project has granted more than half a million dollars to almost 20 projects. In 2017, as most years, the top three winners represented both international and local groups. Local Grace House was one of two runner’s up.

“We put a ton of prayers into this and trust God will put the funds where they need to go,” LeDoux said.

LeDoux led eight sisters July 27 as they toured Grace House and delivered a check to eleven ladies who reside or work there. The group observed pictures of beloved family and friends, personal notes of encouragement, and even dried flowers from a past special occasion.

“Grace House was established to train, support and give hope to women following incarceration, or those in the midst of perilous lifestyles. The Grace House setting and training affords an opportunity for women to overcome the addictive and destructive lifestyles that have kept them from becoming productive citizens,” according to its website.

“The presence of the Holy Spirit was palatable while the sisters and the GH ladies ended with a time of worship and prayer.  After exchanging stories and sharing tears, the sisters left with a feeling of gratitude that somehow they are a little better off for having spent a day at Grace House,” LeDoux said.

“The Sister Project seeks to shine the light of Christ by aiding, assisting and encouraging women in need through the combined gifts of 100 women.” For more information, go to www.thesisterproject.org.