How to Embrace Change 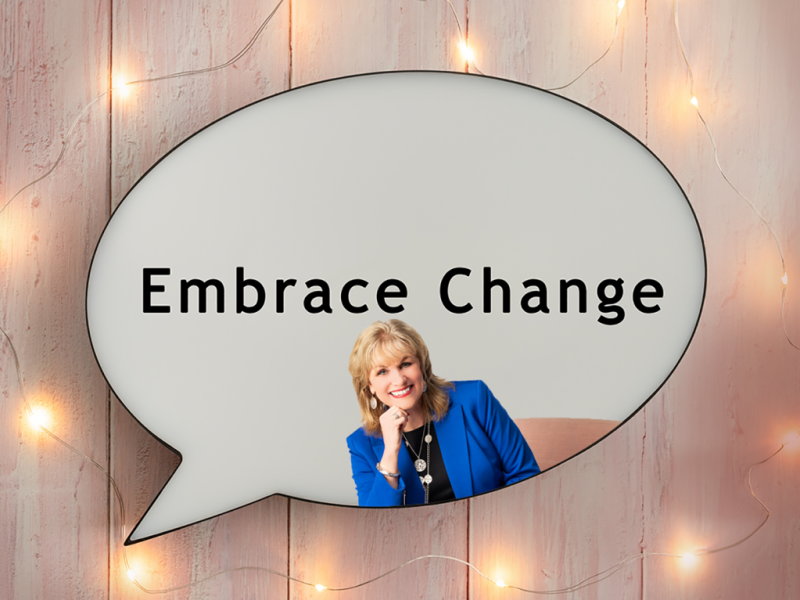 But in this time of pause, it’s also provided us all the opportunity to give God our undivided attention.

Maybe he’s been trying to change each of us in some way to be more like Him, but before COVID-19, we’ve been too busy to hear or focus on a character adjustment.

Maybe He’s been wanting to move us out of one initiative and into another, but we’ve continued to plow forward even though there seems to be harder ground and resistance.

Perhaps we’ve missed some open doors in our lives, but now we are laying everything before God and we are more aware of God’s direction.

Change can be difficult but it is a great teacher.

This morning, I was reading in Revelation 4 and I saw something I’d never seen before. The Apostle John, in exile on the island of Patmos, was given the opportunity to see the throne of God. In front of John was an open door to Heaven, but he didn’t let his curiosity get the best of

him. He did not race in. Instead, John stood still and waited until he was invited to walk through the door, when the Lord himself said, “Come up here, and I will show you what must take place after this” (Revelation 4:1).

What this told me is that when we are open to change, in particular, when we lay all of our activities before the throne and are willing to enter through another door, God will summon us when it’s time. We don’t have to pry doors open, even if it is something that intrigues us and we long to do. We don’t have to try to sell ourselves to others. God’s timing is perfect. If we are to walk through a door, He will call us. He’ll whisper, Come over here. I’ve got something to show you. We just have to be listening.

I believe we are in a major shift right now in God’s economy. He is repositioning those of us in His service, He’s also calling some to serve Him in a greater way, and I feel He’s introducing Himself to those who don’t know Him—in record numbers because He has a captive audience. It’s all about change right now, but how are we embracing change? Are we looking for opportunities to be a light and to be used in a different way, or do we long for the good ol’ days?

One thing we have to remember is that despite the changes going on all around us, we can be assured that God doesn’t change. (Hebrews 13:8) He is the stability we cling to when nothing is stable around us. He is the foundation we pour when He calls us to build on an idea. The ideas, the wisdom, and the favor all come from Him. So today, let’s ask the Lord to show us where we need to change, and what we need to change, and be ready to follow through with it.

“See, I am doing a new thing! Now it springs up; do you not perceive it? I am making a way in the wilderness and streams in the wasteland” (Isaiah 43:19).

Lisa Burkhardt Worley is the founder of Pearls of Promise Ministries, a ministry that helps women overcome past and current dysfunction. Just as a pearl is formed after years of irritation and distress in an oyster shell, God can take our life trials and make something beautiful as well. Lisa is a popular speaker and a nine-time award-winning author of nine books and a Bible study including her most recent award-winning book to help the fatherless, The Only Father I Ever Knew: How a Fatherless Child Finally Found True Love. Her next book, The Root that Never Died: How a Christian Woman was Led Back to Her Hebraic Roots, should be released this fall.

Over the past five years, Lisa has returned to her media beginnings. She is an international Christian radio show Co-Host and now television Lead Host and Executive Producer of the topical program, POP Talk, seen on the Faith Unveiled Network, as well as Facebook Live and the Pearls of Promise YouTube Channel. She spent nineteen years as a national television sports reporter (HBO Sports and ESPN), regional anchor on the Madison Square Garden Network in New York City, and local sportscaster at KENS-TV in San Antonio. POP Talk Radio debuted June 5 on the Fishbowl Radio Network, as well as on other platforms like Spotify, Google Play, Radio Public and Spreaker.