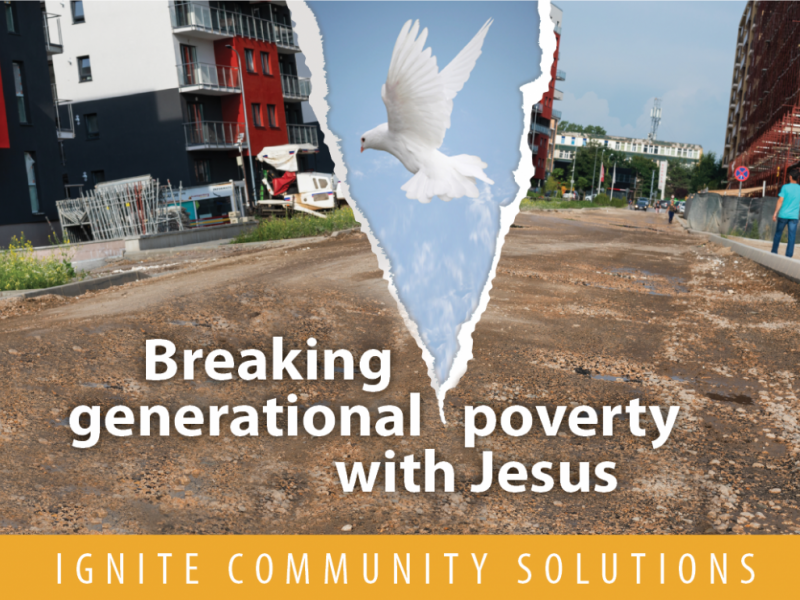 A manager might terminate you from a job. Coworkers’ gossip might ruin a career. But your calling? No one can fire you from your calling.

Clarence Lowe, Founder of Ignite Community Solutions, believes this “life calling” is the seed that can grow hope in the barren landscape of generational poverty.

How? When a young man’s great-grandfather, grandfather and father have all suffered from abject poverty, how can he then find this seed, this calling? How does he find purpose so compelling he’ll risk anything to pursue it? Does he glimpse writing in the sky? Crack a fortune cookie? Hear a voice?

Clarence is no stranger to big life questions. He’s the CEO and Co-founder of Star Force, a full-service provider of innovative workforce empowerment solutions to government, businesses, and academic institutions. For eight years, he’s consulted across the table with people whose get up and go has gotten up and gone. Before that, at Randstad, a staffing and recruiting agency, he oversaw daily operations of six site locations, with an internal staff of 15 personnel and a temporary work force of approximately 1,850.

Clarence’s first time to witness this hopelessness was during his growing-up years in New York’s Bed-Stuy neighborhood, a three-square-mile hotbed of murders and assaults. “I saw constant robberies, lots of gangs. Most of my friends wound up in jail or on drugs. Very few people escaped.” Clarence did escape, however. For one, he says, he grew up with both a mom and a dad who stayed together. Also, after enlisting in the U.S. Air Force (at the tender age of 17), he found his own newfound sense of purpose.

Nine months ago, at the urging of some clients and friends, Clarence officially created a nonprofit called “Ignite.” Through Ignite, those who battle wellness issues, ex-offenders, at-risk youth and low income individuals tackle the big life questions.  The secret?  “Change Your Mind, Change Your Life” workshops, which Clarence crafted over the last decade while at the helm of Star Force. They’ve been received so well that third-party evaluations rank the rate of attendees’ improvement levels well into the 80th and 90th percentiles.

“It was a really powerful conversion,” he says, describing the night he prayed a simple but desperate prayer, asking God to reveal Himself. “I went from being this shy guy in Brooklyn to this person who just went everywhere telling people about Jesus. That was my sole reason for being.” Even Clarence’s constant stuttering — which had plagued his entire boyhood — ceased.

The fuel for Ignite began in 2011, when Clarence and his partner, Patricia Vasquez, had just begun the Star Force business. Clarence was asked to partner with United Way to present their training as part of an initiative to improve some of the dilapidated housing and poor educational conditions on San Antonio’s East Side. It was funded by millions of dollars through the city and by the Obama Administration.

“Quite honestly,” he says, “I was able to witness once again the impact of generational poverty on an individual or on a community — and how people trapped in it often display feelings of helplessness, marginality and dependency or what I call hopelessness.”

The “Change Your Mind, Change Your Life” classes resounded deeply; Star Force created their own measurement tools that first time around.  “The findings regarding the amelioration — or ‘improvement effect’ — for our program’s participants were off the charts,” says Clarence. “Ninety-two percent of the individuals who went to our programs within a three-to-six-month period improved their lives. They went to school; got a degree. Eleven percent of the individuals actually opened up their own businesses. I’m talking about people who were chronically unemployed, underemployed or on drugs. So it had some remarkable results. I was invited to Washington, D.C. to talk about the program. To be perfectly honest, what the program is — is presenting the gospel in a secular setting.”

Clarence says that because the 40 hours of instruction focus so much on one’s purpose and meaning in life, people in the class begin to ask their own questions and invite the speakers into a conversation about more spiritual truths.

The truths are like breadcrumbs, leading the listeners to hope.

While Star Force created its own success measurement tools at first, Ignite has since reached out for third-party oversite. Ignite partners with the University of Texas San Antonio School of Nursing to give ratings. The first six-month period, which is comprised of three phases, earned tabulations which all point to success. “Phases one, two and three were all around the 90th percentile,” says Clarence. Phase one measured social and psychological capital; Phase Two, employment hopefulness; Phase Three, the elimination of barriers for self-sufficiency.

“Critical to the success of the program,” points out Clarence, “is that we’re not just informational. There is a relational component. The people that come through our program become family. There’s an extensive follow along with our programs. There’s a six-month formal follow-up but these people remain in our family. They text us constantly and ask for advice.”

Rosalia, a 32-year old mother of two, is one of the clients from Ignite’s ex-offender program, Reset. She expressed her thanks in a letter:

“I just assumed that being clean, sober and safe would just automatically change my life. Boy was I wrong. Months went by. I was in a fog. Then I met Patricia. She seemed so strong and smart. I thought she must be one of those ‘Mexicanas Ricas’. You know, silver spoon & stuff. But in getting to know her I learned that it wasn’t easy for her. She had overcome much ‘adversity.’ She taught me that word. She made me feel like I could overcome anything —even my horrible past.”

Rosalia goes on to say that she started her own jewelry making business, attended parenting classes and volunteered whenever she could.

“She was just what I needed,” Rosalia continues, thanking Patricia. “because I had just given up. Her self-development classes changed my life.”

Kyle also came into the class in a desperate situation; she was living in her car with her son. Still she had “zero desire to attend.” Afterward, however,
she wrote a letter of thanks to Clarence and Patricia:

“During the class break he made small references to God or biblical stories almost in passing it seemed, like breadcrumbs to see who, if anyone, would like to continue the dialogue. I had no relationship with God at this point in my life and honestly had no desire to build one, but I did have questions and felt this was the perfect opportunity to get some answers. And answers I got — so many of them. Over the course of attending 14 classes (only four were required), my soul was consistently fed with biblical wisdom, a clear and deep understanding of what it means to have a relationship with God and a growing desire to be closer to Him,” she says.

She closed the letter, saying, “I have since graduated with a Masters of Social work, co-founded a nonprofit agency, and have the amazing opportunity to sit on the board of Ignite with my long-time mentors, Clarence and Patricia.”

It’s no small wonder that Ignite triggers a powerful spark.

Because the flame of your calling can never be extinguished once it’s ignited.

Pray. Ask the Lord to open hearts and break the bonds of generational poverty in San Antonio. Partner. Contact Clarence today if you know organizational leaders who can get this curriculum into the right hands. Donate. Visit the Ignite Community Solutions website, then click on the yellow button (upper right corner). Greatest need: monthly donors.

Jennie Rosio is an independent professional writer based in San Antonio and editor of The Beacon.