March On for a United Community 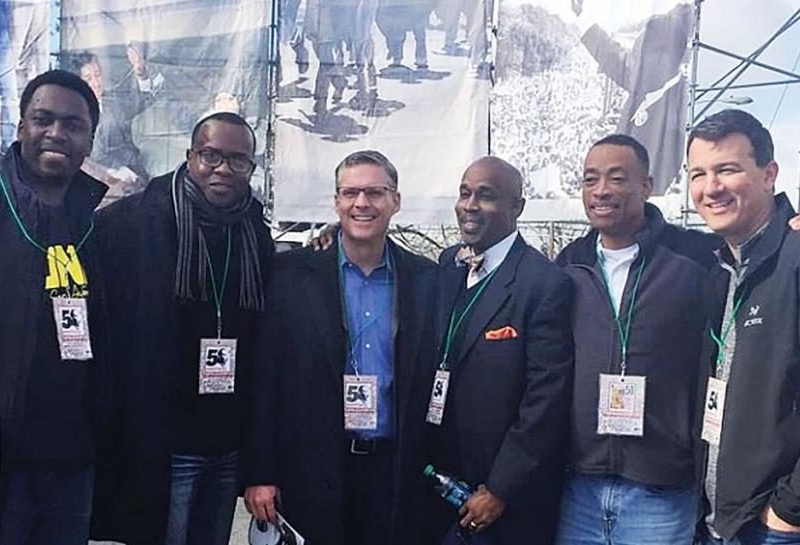 Thank you to Southwest Exteriors for making this story possible to share.

For most of my life, I’d thought of Martin Luther King Jr. Day as a holiday for black Americans. While I was supportive of it, it seemed distant and unrelated to me personally. Then one day while eating lunch with an African American friend, it suddenly hit me: Were it not for Dr. King and those who bravely marched with him, my friend and I would not be eating together.

In that moment, it was like the sun was starting to rise on the far horizon of my mind. Other faces began to appear in my thoughts; faces of other African Americans who’d been influential in my life. People like Coach Cross, my middle school football coach, who taught me to quit whining and start working (a good lesson for every middle school boy!).

I thought of my friend Carlos, who was my constant competitor from 7th-12th grade. Sometimes he’d win, other times I’d come out ahead, but one thing was certain: I would never have been spurred on by this smart, capable, athletic friend—who also happened to be black—were it not for Dr. King and those who marched with him. My paradigm was changing.

Then, it dawned on me that while the Civil Rights Movements was led by black Americans, it wasn’t solely for black Americans. The equal rights provided for in the Civil Rights Acts of 1964 paved the way for people of every race to enjoy equality. Again, faces of people flooded my mind—faces of people who’d influenced my life and still do. I thought of the Gonzalez family in our church and the great spiritual blessing of friendship I have with Jeff as a fellow elder in our fellowship. I thought of a Filipino couple with whom I’d become friends and the wisdom of Sonny and the sweet compassionate heart of his wife, Lynn. The face of a Korean couple came to mind. They always greet me with joy and encouragement whenever we pass each other in Panther Springs Park. I would know none of these people, much less the benefit of their friendships, were it not for Dr. King and the courageous ones who marched with him.

How could I possibly think of this holiday as one solely for black Americans when I have so personally benefited from the work which the holiday commemorates? No, Martin Luther King Jr. Day is a holiday for me as much as anyone—it’s a holiday for all Americans.

My bet is that as I shared with you the names of people of different races who’ve influenced my life, names and faces were coming to your mind as well. Like me, aren’t you the recipient of the blessing of someone of another race? Haven’t you been improved, instructed, or encouraged by someone of a different color? Of course you have.

My hope is that as these names enter your mind, gratitude will well up in your heart as it did mine. It’s always good to have something for which to be thankful. Remember, though, in many ways, the march to Selma isn’t finished. A national holiday wasn’t Dr. King’s goal. He was after even more than emptying our federal and state laws of racial discrimination. He dreamed of racial equality. Where we partake of the rich harvest God has for us in his design of varied races and cultures. Without a doubt we will have to work at it.

For me, as a local pastor, I have to look beyond just the words I speak on Sunday. I’ve got to reach out and develop relationships with other pastors of all races. We’ve got to come together so we reflect God’s prophetic design of every tongue and tribe worshiping together. I hope you’ll be encouraged to know that there are at least 50 pastors in San Antonio who are deeply committed to our being one Church. These pastors are meeting for friendship and encouragement. They’re praying together and working together. Only good things can come of this—and we know they will, because this is surely God’s plan.

What is your role in this? What’s the right next step for you to contribute to the dream? Perhaps it’s to write a letter of thanks to someone who influenced you positively or to forgive someone who didn’t. Maybe you could intentionally establish a relationship with someone different from you. And let’s be frank, if you’re white, as I am, it is incumbent upon you to initiate. Most political and corporate executive roles are held by those who are white—that equates with power and power comes with the responsibility of lifting others up. Let’s continue the march to Selma and realize the dream together.

Pastor Kirk Freeman is lead Pastor at Crossbridge community Church in San Antonio which he and a team started in 2003.