Restoring life to the homeless and hopeless 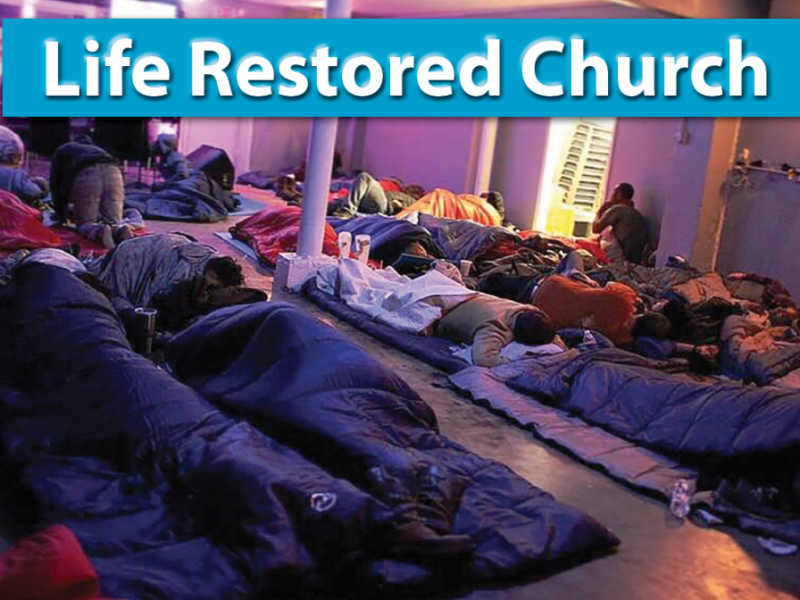 Growing up on San Antonio’s west side near Buena Vista, Alex Fleming remembers seeing many homeless people living in camps near the bridge. They braved the cold winters and the Alamo City summer heat waves.

It didn’t take long for Alex to develop an appreciation for having a roof over his head and a burden for those who did not.

Today, Pastor Alex, 41, leads Life Restored Church, a ministry to the homeless in his area.

He became a pastor after trusting in Christ in 2003 and undergoing years of discipleship.

Pastor Alex is the type who will give a needy person the shirt off his back, but wanted to do even more when he learned that on a freezing night in San Antonio, a homeless person died from exposure.

“I told the church I felt the Holy Spirit wanted me to do something,” says Pastor Alex, who attended Lanier High School and then later Fox Tech High School.

Live on Facebook, Pastor Alex walked outside his church and took his shirt off, enduring the freezing weather for 30 seconds. He challenged other men to do the same.“Imagine the homeless being out there all day in those conditions,” Pastor Alex says. “That moment gave us media coverage through the city and was a pivotal moment in the ministry.” Stockpiles came in: jackets, sleeping bags, and other supplies the homeless needed.

“I asked Jesus what we should do with our church building,” Fleming says.

The answer: transition from a church that’s open twice on Sundays and once on Wednesdays to one that’s open 24/7. “The vision is we never close and we always help. We are closer now. We will get there very soon," he says.

Pastor Alex became a Christian after his now-wife invited him to an outreach event at Cornerstone church.

“I went and accepted Christ, out of respect as a Catholic,” he says. “Growing up as a Catholic, you respect God. When you pass by a church with a beer, you put it down, make the sign of the cross and then pick it up again.”

I asked Jesus what we should do with our church building.

After becoming a Christian, Pastor Alex began to fall in love with Christ. God gave him many mentors, including Pastor Warren Beemer, Jacob Diaz, and many others including his current one, John Walters. The discipleship taught him commitment, persistence, wisdom and financial peace. It also fueled his desire to change lives, and he remembered the homeless and set out to make a difference in their lives.

Life Restored Church, at 400 Arbor Place near where Interstates 35 and 10 meet west of downtown, was birthed out of his heart to change lives.

“Our focus has always been the westside,” he says. “That was always my people and where I’m from. Some said, ‘Plant the church in the suburbs to have more of an outreach.’ I felt the church’s core and DNA needed to be reaching the down and out. When we moved into the building, most of people we encountered were homeless.

“We’ve told church leaders that we all need to do more to help the homeless,” Pastor Alex says. “We’re working to offer more meals per week, showers, and inspiring other pastors to do more than the bare minimum. I answered these leaders’ questions and explained: the homeless aren’t a gang. They don’t all know each other. If we could get city churches tackling the homeless problem, then there would not be a homeless problem. Consistency leads to life transformation.”

Pastor Alex has seen the results as some have gotten off the street into their own place. One man cried as he showed Pastor Alex his apartment keys; that man now volunteers and serves.

“Eight homeless have become members of our church,” Pastor Alex says. “They desire to know the Lord and have a church family.”

One man cried as he showed Pastor Alex his apartment keys; that man now volunteers and serves.

Perhaps another reason Pastor Alex feels the burden to reach the homeless:  it’s a subculture of drug addicts, former inmates rejected by their families, veterans, and even those who want to live off the grid.

Pastor Alex spreads the word about his ministry on Facebook to reach more churches.

“We definitely need the involvement of ‘The Church’ in general,” he says.

They serve breakfasts six days per week but would also like to eventually include lunch. They’d also like to have a detox area for drug and alcohol addicts; this would require the services of doctors.

Pastor Alex does not see a reason to apply for government grants. “I believe the Kingdom of God has all the resources we need.”

He and his church are also praying for an 8,800 square-foot building that would house 300-400 homeless, five days per week. He described this as a “church-run, Christ-centered, emergency shelter, and a destination of hope.”

This summer, many area churches are sending kids to inner city missions, which is fantastic. But, what a privilege we have in our own city, 24/7, 365 days a year, at Life Restored Church!

Give. The Life Restored Church needs financial gifts most of all. Contact Alex to learn how you can take part as a foundational giver to purchase the much needed building to increase their impact. Dive in and help. They need social workers, case workers, prayer chains. More manpower overall would help. Currently they run showers Tuesday and Wednesdays from 10:30 a.m. to noon, but with more volunteers they could do it almost every day. Sign up to help serve meals beyond breakfast and use that time to meet with the homeless and pray with them.

Thank you Lord, for this anonymous donor who generously gave so Life Restored Church could be featured in our May/June Issue. With this generous gift, we are able to raise awareness of this ministry and the difference they are making in our community.

Richard Zowie lives in Fredericksburg and spent 15 years as a full-time journalist. He now works as a radio broadcaster at Texas Rebel Radio, AM 910 KNAF and as a freelance writer.