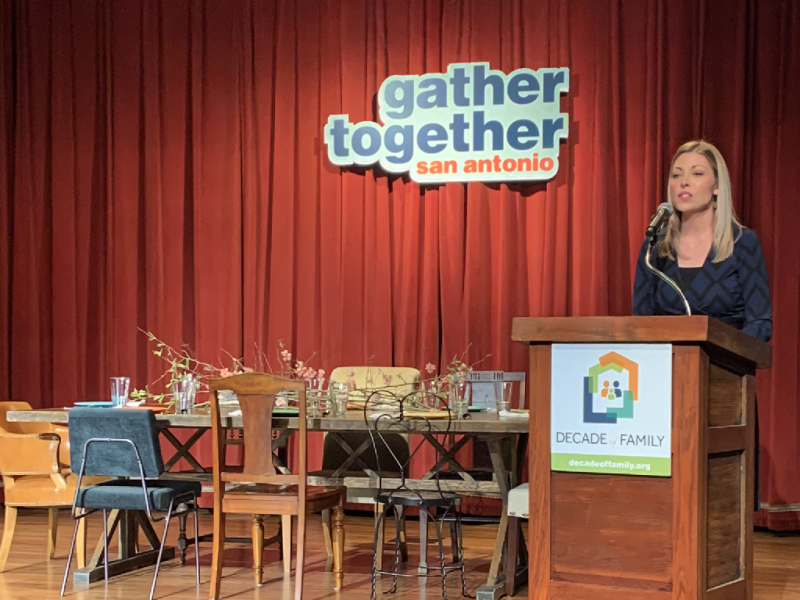 In late February, several hundred influential San Antonio leaders met in support of our city’s most valuable resources—its families. The mission of the event was to share a vision and launch a movement called the Decade of Family, spearheaded by a local facilitation group called UnicitySA. Innovators from businesses, nonprofit organizations, churches and faith-based ministries began conversations about how to help San Antonio’s families become stronger and more united so that 10 years from now San Antonio will become the best city in the nation to raise a family.

Although many sectors of the community advanced in the past decade, family flourishing did not keep pace. San Antonio has the highest poverty rate of any major city in the nation and the highest rate of domestic violence. A quarter of our children are food insecure. The breakdown of the family causes many of the downstream problems social agencies struggle to fix—homelessness, crime, drug use.

UnicitySA Board Member Mrs. Megan Legacy knows firsthand of the struggles that families face, as she sees them every day in her position as Executive Director of the San Antonio Hope Center. Mrs. Legacy inspired the crowd with her personal testimony overcoming family struggles.

It was her visit to one of Washington D.C.’s most blighted, gang and drug filled sectors that opened her eyes to the depth of human desperation. The poverty and hopelessness she saw caused her to refocus her priorities and expend her professional energies to help the less fortunate.

Mrs. Legacy charged like-minded individuals at the launch to break down the silos isolating the many good agencies, organizations and initiatives already working in San Antonio and allow groups to synergize their efforts for greater effectiveness.

“We don’t need more service organizations. We need to gather more servants and engage, mobilize and equip hearts and hands to help,” she says.

“We believe that strong cities are built by strong communities, and strong communities start with strong families. By meeting families where they are, and offering assistance and encouragement, we aim to make San Antonio the best city in which to raise a family by 2030,” says UnicitySA Board Chairman Mr. Scott Barr.

“Our mission is to empower families to grow stronger, generation by generation.” Mr. Barr describes the initiative as a “Christ-centered, nondenominational, nonpolitical nonprofit.” He notes it promotes unity and collaboration between faith-based and faith-neutral organizations.

Following the principle of attacking the smallest debts first, Mr. Barr calls people of faith and people of good will to “step into the gap of leadership to solve some of the city’s most tractable social problems.”

“By meeting families where they are, and offering assistance and encouragement, we aim to make San Antonio the best city in which to raise a family by 2030.”

Max Lucado, a highly respected spiritual leader from San Antonio and national best-selling author, is one of the leaders featured on the Decade of Family launch video. His words invite people of faith and goodwill to rally together. “Rather than ask, ‘What do you believe,’ we ask, ‘Do you care about the same things I care about?’" If the answer is yes, then let's begin to dialogue and collaborate so we can empower families across our city.

Discover. Sign up for a listening event to share your perspective. Share. Spread the word about the need for family flourishing. Volunteer. Share your time and talent. Support. Give to one of the partner nonprofit organizations. Pray. Pray for the movement to change lives.

Bachelor's degree in Journalism from TCU. Columnist for the Medical Gazette. Worked in Medical Marketing and Public Relations for 5 years before working as a pharmaceutical representative for 3.