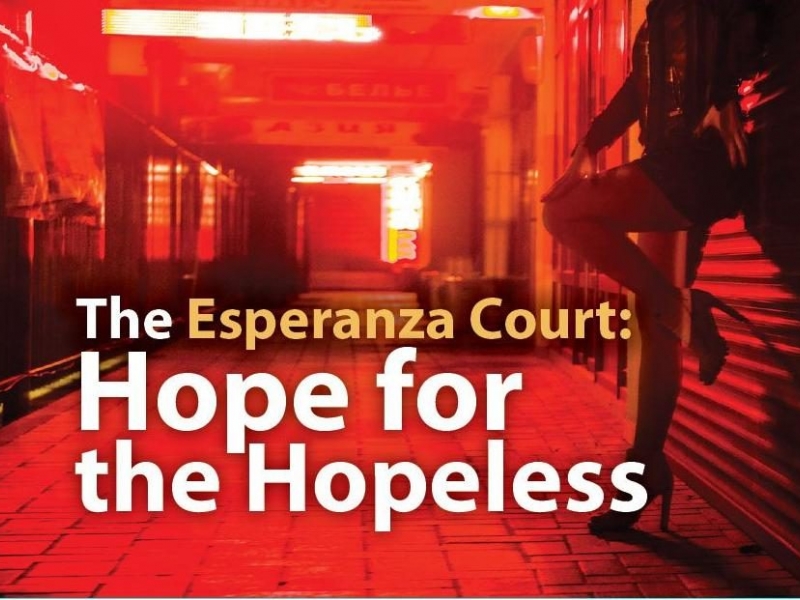 Thank you to the Law Offices of J Charles Bunk for making this story possible to share.

She was at the corner of Avondale and S. Presa Street when we first met. I had just finished talking to the bartender about the care packages my ministry was starting for the women on the streets. The women caught up in prostitution and addiction. Women that wanted to change but did not know how due to lack of support or fear of coming off the very drugs that were killing them.I saw her sitting under a street lamp at a bus stop. I pulled up beside her to call her name, “Genevieve! Genevieve!”

She looked at me with a suspicious look, “Do I know you?”

“The girl at the bar gave me your name. I’m out here ministering to the women of the night.” I pulled over and got out of my car to minister to Genevieve. This was December of 2014. The same month the naked body of 15-year-old Natalie Chavez was discovered under a San Antonio West side Bridge – brutally raped, beaten and murdered. Little did I know that a few months later, Natalie and Genevieve would share the same fate.

According to the Texas State Historical Association (https://tshaonline.org) article, Prostitution by David C. Humphrey, “Prostitution has long been a feature of the Texas social landscape. In 1817, when Texas was still a Spanish province, nine prostitutes were expelled from San Fernando de Béxar (San Antonio). Spanish-speaking prostitutes resided in San Antonio from its early days under Texan rule. Anglo prostitutes joined them during the 1840s and 1850s, and by 1865 both groups were entrenched.”

“While the overall numbers are down, which are a result of street operations and the diversion programs done by the DA’s Office, Internet prostitution is increasing every year. There are a lot of the street girls moving to the Internet, it’s just easier for them. Internet prostitution cases also take us longer to do. For the same time it takes to make one Internet case, we can do at least three street cases.

Prostitution may be a major issue in San Antonio, however, there is a Specialty Felony Court Program called The Esperanza Court that is offering, not only a solution to the prostitution problem, but a way of hope for these very women that society has deemed as hopeless.

Judge Lorina Rummel of the 144th District Felony Court, oversees The Esperanza Court, which is 2.5 to 3-year Specialty Felony Drug Court. Judge Rummel, with a team of one Probation Officer, Case Managers, Prosecutors, Housing and Mental Health Representatives, along with several strategic staff, are helping to make this program effective and successful.

When asked about The Esperanza Court being in other cities, Judge Rummel answered,

“By Legislation, this Specialty Felony Court must be in every county with a major population. In Texas, this court is in Fort Worth, Dallas, San Antonio, Houston and Austin. Only in San Antonio is it known as The Esperanza Court. The Esperanza Court is also funded by government grants through the State of Texas.”

Regarding a December 2016 article written by Elizabeth Zavala of the San Antonio Express News, “The Esperanza Court is open to men and women. Officials describe it as a problem-solving court, supplementing the routine of criminal justice by working to modify criminal behavior. It focuses on criminals who have convictions of three or more convictions for prostitution by offering treatment and therapy, for drug and alcohol abuse, trauma and mental health issues, county officials said. For those who participate, it is a way to confide in and bond with others in the same situation, talk about their problems, learn job-seeking skills, and stay out of jail or prison.”

To partake in the program, participants are screened by Judge Rummel and her team members. Each person must be on felony probation, as well as have a history of prostitution in his/her background. They must also understand the benefits and requirements of the program and be willing to put in the time and effort as participants. The program currently has approximately 40 people involved.

In a phone interview, Judge Rummel reinforces the intensity of the program, “As part of the two-year program, the participants are closely supervised and must undergo weekly drug and alcohol screenings. There is daily contact between the participants, team members and myself. We meet once a week. This is the most enjoyable part of my week.”

The program works with the participants by providing basic needs in the early stages of the five-phase program. Not only is mental health and therapy provided, housing is provided transitioning them from a negative environment to a positive, encouraging environment. This sets the foundation of being reintegrated as law abiding and productive members of society.

The Esperanza Court, meaning hope in Spanish, teaches accountability, and challenges the women to get their GEDs, find employment, and attain a higher form of education. The court has also been successful in helping pregnant participants give birth to drug-free babies.

The Esperanza Court had its first graduation in December 2016 since its 2.5 year start in 2014. There will be another graduation taking place in March of 2018.

When asked about future goals and needs of The Esperanza Court, Judge Rummel stated, “To keep running it, to see more graduates. As far as the need goes, more jobs for people that have changed their lives. More potential employers for people with checkered pasts that have proven themselves.”

Judge Lorina Rummel is up for re-election for the 144th this year. To keep her vision for The Esperanza Court, she needs to be re-elected. She does not have an opponent in the March election. However, come November, she will have an opponent on the ballot.

After the interview with Judge Rummel, my mind raced back to Genevieve on Saturday April 4, 2015. The day I received the text from the same bartender that told me about her.

“Did you hear about Genevieve?” I read.

“The news is over here. I wanted to tell you before it got out in the media. They found Genevieve’s body!”

Just a few hours earlier, I was at the same bar looking for her. Everyone thought she was with me. She had been talking about contacting me since the week before. She wanted off the streets. She was voicing how sick and tired of being sick and tired she was. She wanted to change.

Genevieve Ramirez, 45, was found near death in an alleyway on the 100 block of Avondale, by a man that was cutting his grass. In a June 22, 2015 News4 Interview, Bexar County Sheriff Javier Salazar (whom was a SAPD Sergeant at the time of Genevieve’s death), was stated as saying, “She had what may have been trauma to her neck area and she was also under the effects of what may have been a heroin overdose.”

Ramirez and Chavez had one thing in common: both were victims of Johnny Avalos, now deemed as San Antonio’s South Side Serial Killer. Avalos is in the process of court proceedings regarding the four women he brutally murdered in a four-month time span from December 2014 to April 2015.

Genevieve died two months later in a nursing facility while in a comatose state. Programs, such as The Esperanza Court, offer transformational hope to prevent future Genevieves from dying.

Writer Dana Michea Marquez is a wife and mom of two intelligent boys. She has been writing since elementary school, when she first started writing poetry. Mrs. Marquez has a passion and calling in helping women caught up in prostitution and drugs through her soon-to-be non-profit, Genevieve’s Purses. Among Michea’s many gifts and talents, she is also an entrepreneur. She currently owns New Wavez Vizion Consultants, which is an Event and Marketing Business. She and her family attend Victory Outreach of San Antonio Church with Pastor Luis and Debbie Molina, Jr. Michea can be reached at Newwavezvizion@gmail.com

What a wonderful program.

Jesus Christ was not too good to mingle with and minister to prostitutes. His followers should do the same. Way to go Michae.

Author has a clear heart beat for the “hurting women”

I’ve known Diana Marquez for 10 years now, author of “Esperanza court”. She is was once my roommate and still a great leader for our church VICTORY OUTREACH SAN ANANTONIO. She’s always been faithful to her love and passion for going out onto the streets of San Antonio and first hand reaching hurting souls. Mrs. Marquez is a true “BEACON OF LIGHT” in the San Antonio community. She deserves to be reaconized for her true dedication to reach out and into her community hands first and heart first.