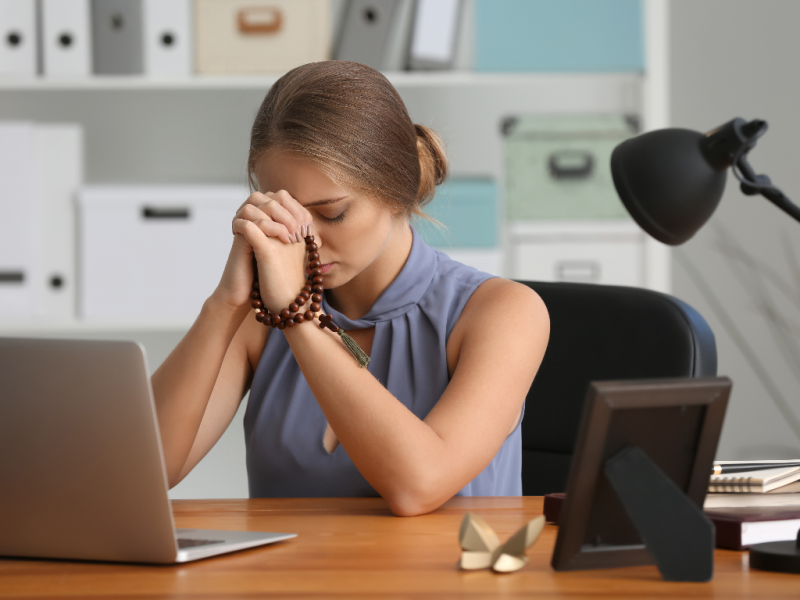 Why don’t people say “TGIM?” TGIF (Thank Goodness it’s Friday!) is a popular exclamation for those longing for the end of a work week and “real life” to begin. When I tell people how excited I am for Monday–TGIM–I get responses suggesting I am clearly odd. I get it.  Many people do not enjoy their job. Even folks who own businesses often feel like slaves to the business. What if work was not only sacred (matters to God), but the very setting to change the world? What if Monday was D-Day, the launch point of a campaign to experience and witness the very Kingdom of God?

While delivering the most radical campaign speech in the history of human leadership (the “Sermon on the Mount”), the apprentices of Jesus asked their Rabbi how they should pray. Jesus had been announcing that a new “kingdom” was beginning and inviting folks to experience it. In modern language, it was the introduction of the “Jesus Administration.” Jesus responded with words millions of American’s can recite as part of our post-Christian social conscience:

Our Father in Heaven,
Holy is Your name!
Thy Kingdom (the Jesus Administration) come,
Thy will be done,
On earth as it is in Heaven

When Jesus instructed this model prayer, what exactly was He suggesting? For people to live for the weekend and then think about harps and clouds? If the life of Jesus or His disciples is any indication, evidence would suggest that the thrust of this prayer is something entirely more radical and domestic. Something is to come, to be done, “on earth” which would seem to include where we go to work. Right here and now.

What does it mean for the “Jesus Administration” to intersect the American Marketplace? What would it look like to pray and live “Thy Kingdom come…at work?” Certainly we are called to gather in and serve via local churches, but Sundays are like the locker room huddle whereas the work week is where we get in the game!

Of the 132 Biblical stories of Jesus, 122 happened in the marketplace[1]. A vast majority of His teaching, healing, disciple-making and engagement of society happened during business hours on business days where people least expected to encounter God. Of the 40 miraculous events recorded in the Acts of the Apostles, 39 occur outside of any religious setting. Life-changing ministry intersecting common people in common places is Biblically normative and was the context of the greatest social revolution in the history of mankind.

What would it mean for followers of Jesus in the marketplace to embrace the invitation of the Lord’s Prayer in business? The same year that the “balanced scorecard” entered the American lexicon (1992) leaders gathered around C12 Group roundtables began working out a paradigm for an eternally balanced scorecard ultimately called the 5 Point Alignment Matrix. It frames the question, “What would be impacted by praying ‘Thy Kingdom come…at work?’”  Everything.

The policies of the Jesus Administration impacts hiring, employee benefits, product and process quality, leadership, accountability, contracting, disputes, and corporate citizenship. What if a business was not merely an economic engine called to a minimalistic ethic of “do no harm,” but a sacred platform poised for significant impact on society? What if truly great businesses are intended for a greater purpose via the wild invitation of the Lord’s prayer?

In nearly 25 years of serving marketplace leaders we have found the answer being things like:

The results have been incredible! Tens of thousands of people coming to know Jesus through workplace encounters; God glorified by companies that reflect the Jesus Administration; businesses outperforming peers and achieving all of the accolades of the marketplace for financial and culture achievements, and transformed lives. You can read books, join peer groups, seek counsel and consume massive resources on the implication of faith-fueled work. On Monday, however, will you dare to pray the Lord’s Prayer at your work, in the business God has destined you to steward for Him?

Saying and believing those simple words will change what you do, how you do and why you do everything. Living out the policies of the Jesus Administration will transform you, your department, the company and can literally change the world. Less than 40% of Americans attend a local church, but 90% will go to work on Monday. If you will really pray “Thy Kingdom come, thy will be done…here” at your work and then actually live it out, you might find yourself saying TGIM just like me. Those who work with you will, too!

Thank you for this beautifully written article. I've always kind of puzzled about what this phrase means: "Thy kingdom come." This article helps make it clear. What a great interpretation here: the "Jesus Administration." I vote for that! I think most of us have buckled under the pressure to one degree or another in the workplace with all that 2020 has poured out on us. But your words are inspiring. San Antonio needs hope. Thank you for another great story, Mike Sharrow!