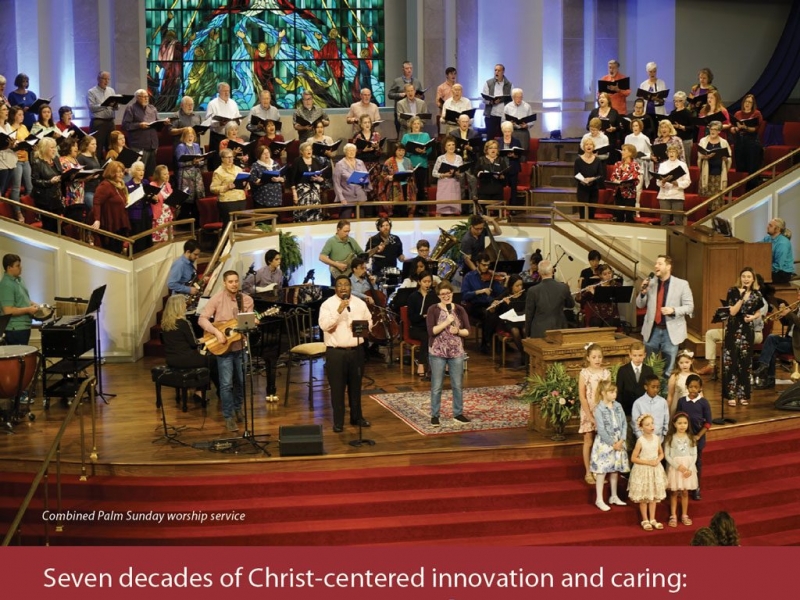 When 94 people gather to pray fervently, more than seven decades can feel the ripple effect.

In June 1949 — just a year after Israel became a nation, and seven years after the San Antonio airport opened — some prayers started moving mountains in the Alamo City.

Marjorie Brake, charter member of Trinity Baptist Church, was 10 at the time. “I was sitting on a stool in front of the sofa where my parents were praying. All I could think was, ‘Something special is happening.
I know it is the Spirit of God moving.'

“On Friday night, June 24,” says Marjorie, “we became chartered by the State of Texas Baptist Church. Our first worship service at the church was Sunday, June 26.”

Soon, they were breaking ground on a plot that’s a little over five acres, located on a gently rising hill at the corner of Shook and East Mulberry Avenues. They built a beautiful little building. San Antonio’s population at the time was 400,000.

The pastor they called in August of that year, the Rev. W.S. McBirnie, affectionately called “Brother Mac,” was innovative and persuasive. This north edge of San Antonio did not offer much in the way of community gathering places in the 1950s, so Trinity provided it. They built a college-size gym, a roller skating rink, four bowling lanes, a kitchen and several classrooms. In 1951, TIME called this gathering a “boom church.” Within two years, it had grown to 1,000 members and was the fastest growing church in America.

Ten years later, Buckner Fanning, a U.S. Marine turned evangelist, was called to Trinity Baptist. In 1957, Newsweek had compared Buckner to Billy Graham. While he pastored Trinity Baptist for over four decades the membership grew. At one time, there were more 10,000 on its rolls. While uncompromising with gospel truths, Buckner continued to welcome Trinity’s community. He partnered with Catholics, Jews, Muslims and other Protestant denominations. Many remember Buckner’s 30-second TV spots; he recorded more than a thousand in three decades.

In 1962, as chronicled in Carl Moore’s God’s Lighthouse on a Hill, a woman in the church came to Buckner, saying, “There is no place in San Antonio for alcoholic women who want to find a place of refuge and help. Do something about it!” In 1966, Alpha Home was born, and Trinity became the first church in the nation to create a ministry like it.

Although Buckner’s retirement from Trinity in 2002 brought a decline in membership, the Holy Spirit was at work. Charles Johnson took the helm next and led the way to a more diversified Trinity. Under his leadership, the church purchased what’s now called TriPoint — A Center for Life, giving Trinity a perfect spot to reach out to people in America’s fastest growing city in unique ways.

Trinity heals, grows and pulls the arms of Christ around San Antonio more than ever

In 2009, Dr. Leslie Hollon came to be Trinity Baptist’s fourth pastor. He had always seen Trinity as a church who put the arms of Christ around the city of San Antonio. His mission was to bring healing to a church struggling to rebound. Regarding his call to Trinity, Pastor Les says, “I felt challenged. My excitement to take this call really has flowed out of loving Trinity and San Antonio. And though feeling the ache for the church’s recent pain, I believed in God’s future for Trinity.

“As we are healed and made strong, we have this great mission of partnering with the gospel and sharing God’s love. That’s across the streets of San Antonio and that’s in regions around the world. It’s been hard but rewarding work. I am grateful for the church’s membership and staff for their great ministry.”

The work continues to be walking by faith and pioneering nonconventional approaches.

“We are one church with three campuses working synergistically together,” Pastor Les says.

What are the three campuses?

The ISAAC Project offices through the Mulberry campus also. Legal immigrants find someone to guide them through the difficult process of obtaining legal documents for their status so they can succeed in America.

At the Mulberry campus, anyone can attend the 10:15 blended service, or one of the 9 a.m. Bible classes of all kinds for kids and adults.

For example, if you are a youngish adult, you could choose the Illuminate class, led by Minister of Young Adults Christopher Mack along with the Brachers and the Dawsons. Also in the Illuminate class is August Higgins, Trinity's Executive Research Assistant. The Illuminate class does a great job guiding his class to create outreach projects and encouraging people to know Jesus in a personal way.

Arthur Queen, who’s been attending Illuminate over the last year, recounts how August and many of the other members at Trinity have been used by God to bring a fresh sense of joy to his life.

“Our class is wonderful and open. It’s a genuine feeling of joy that’s not forced. They’re not doing it out of, ‘I have to.’ They’re doing it because ‘I want to.’ Because they’re passing on the joy that God had given them, and we can really feel that.”

Arthur recalls that he had fallen away from pursuing God in his life. He’d been to college, gotten married, had three children. He was longing to get back to the Lord; it was during a season of looking for human approval and not finding it.

One day in October, though, he came to the chapel alone. “I’d let Him down,” he recounts. “My life had gone so far away. I was just repenting and saying ‘I want to change. I want to accept you as my Savior.’ And that was the turning point in my life of putting my identity as what God tells me, and not what people tell me.”

Ruble Center. Trinity Baptist Church’s Ruble Center on 419 E. Magnolia is a place where some of the church’s most dramatic life changes take place. Alpha Home, housed there, leads women to recovery from chemical addictions after following a 12-week treatment taking a faith-based approach.

TriPoint Center. Mulberry, Highway 281 and St. Mary’s all converge together at TriPoint. The building, home to the D.R. Semmes Family YMCA and state-of-the-art business meeting rooms, is a three-minute drive from the Mulberry campus. It’s also home of a unique place to worship called, “Crossings.” Pastor Les preaches there three Sundays per month and Christopher Mack preaches there once a month. Crossings service attracts Summer Moon Coffee Bar customers as well as many neighbors and those who used to shop at the Albertsons which operated out of that building for years before closing. Also, many of the worshippers at Crossings come from Alpha Home (a two-minute drive in the other direction on East Magnolia).

T.A.C.O. Tuesday meets in The Hub at TriPoint, offering free food, child care and fellowship. About 40 come weekly from all walks of life. The study focuses on truth, assurance, commitment and obedience and is “designed for men and women of all ages who want to explore the foundations of the Christian faith.”

When I visited the Crossings service at TriPoint one Sunday, three of the members from Alpha Home Ministry were in the front row, robed in white and ready to be baptized. Their hands were clasped together and held high, singing with all their hearts. Two women who’d moved from Alpha Home into Universal City sat behind me. I asked them how they liked Crossings services. One of them said, “It’s a little drive, but it’s definitely worth it.” The other chimed in: “Nothing compares to this church.”

Seventy years. Seven thousand souls saved. Nothing compares to the love of Jesus at Trinity Baptist Church and the power of the Holy Spirit, which is still going strong. 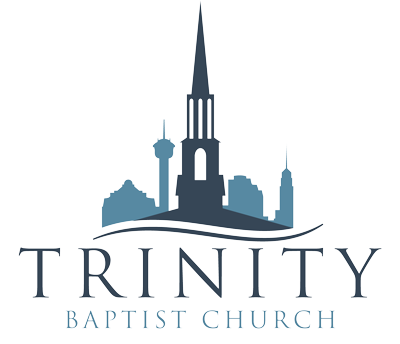 Visit. Plan your next visit by first checking out the many opportunities at Trinity’s website. Meet the friendly people! Jump in. Volunteer your time; boredom is the only thing you have to lose with their innovative approach and eagerness to try new ministry ideas. Pray. Or ask for prayer. Ask God to multiply disciples through Trinity’s members. Or ask for prayer at their round-the-clock prayer ministry: (210) 738-PRAY (7729).

Jennie Rosio is an independent professional writer in San Antonio, and editor of The Beacon.

Faith Happening in the Church Where Hope Comes From