Two of the most powerful words — I can't

Even in the midst of downtime, we can take on too much. We can fall into the trap of feeling like we need to solve every challenge and conquer every demon for Jesus. Mike Sharrow, CEO of C-12, was reminded of that fact ... and the solution in his recent blog post.

A major decision for anyone reading this article is whether you will truly be a “faith-driven” (as in the very engine, operating system, fuel, source) or a “faith-inspired” entrepreneur. The market is awash of moral, virtuous entrepreneurs who throw a periodic hat tip to Jesus (#blessed) and even seek to draw upon Biblical principles to enhance their ventures. That is what Paul told his apprentice, Timothy, is like “having the form of godliness, but none of the power.” How we relate to God and how we then operate from an identity defined by the Gospel radically alters how we lead. It’s not a simple decision point, either; it’s a daily “working out your salvation with fear and trembling” battle! I like how Skye Jethani addresses the predicament in this helpful micro-teaching on the way we relate to or “WITH” God.

In 2009 my wife and I flew to Seattle, rented a car and began an epic road trip down the famous Highway 101 (or the Pacific Coast Highway, “PCH”) all the way to San Diego with no reservations, beyond a return flight booked in San Diego. This was a rejuvenation trip so we made the rule “no talking about work!” It was awesome. I’d do it again in a heartbeat!

About 24 hours before this escape was coming to an end I was driving along the coast while my wife caught a short nap. The end was nearing so my mind was wandering to the stress of “re-entry.” I had been resisting the constant vibration of my Blackberry (it was 2009) so I KNEW the hundreds of emails boiling over for a response were ravenously looming over my head. I began to think about the meetings, the situations on hold, the people drama I needed to address, and everything “back home.” I thought about issues at my church, with some friends, a bunch of challenges in my city, a non-profit project in crisis and, and, and...it was like the weight of the world began to crush me into the bucket seat of that rental car. I felt like Atlas, but without the body, and it was too heavy.

We came around a corner and there it was: Pfeiffer Falls. I had no idea what it was, but in the middle of the Big Sur area of Southern California was one of those vistas that just takes your breath away. For a moment it arrested my attention from agonizing self-pity to awe and worship. “Wow, God! Well done - that’s incredible!” Redwood trees, a sandy beach, an elegant waterfall onto the beach with rocky arches and waves crashing in and a sunset forming. It was sensory overload - too much wonder to even digest. I had to pull over and just stare at it.

Then God spoke to my soul. “Mike, do you see that? I made that. Even better - that scene is a distant ripple of the world I created eons ago with mere words, unleashing untold thousands of natural ‘wonders’ across the cosmos! And, you know what, Mike? You weren’t there. Yeah, you didn’t help me build it. In fact, I don’t recall ever asking you to be my consultant or special agent. You seem to be acting as though I redeemed you to go save the world for Me. That’s My job and I’m perfectly able to complete the good work I began...with or without you. I’ve not asked you to save the city, rescue my church, heal people, solve the predicaments of the world or have all of the answers. Those are jobs YOU are assigning yourself. I have redeemed you to be My son. To be WITH Me. To listen and be totally satisfied with Me. That’s your job. Can you get back to that?”

With each truth bomb it was like God took cinderblocks out of my backpack and blew oxygen on my soul. I was resuscitated from asphyxiating on the weight of the world that was not intended to be mine. Freedom!

My wife and I had a canvas print made of that scene we keep above our dining room table to remind me of that moment.

But I’m a slow learner. Sometimes I need to repeat a lesson! 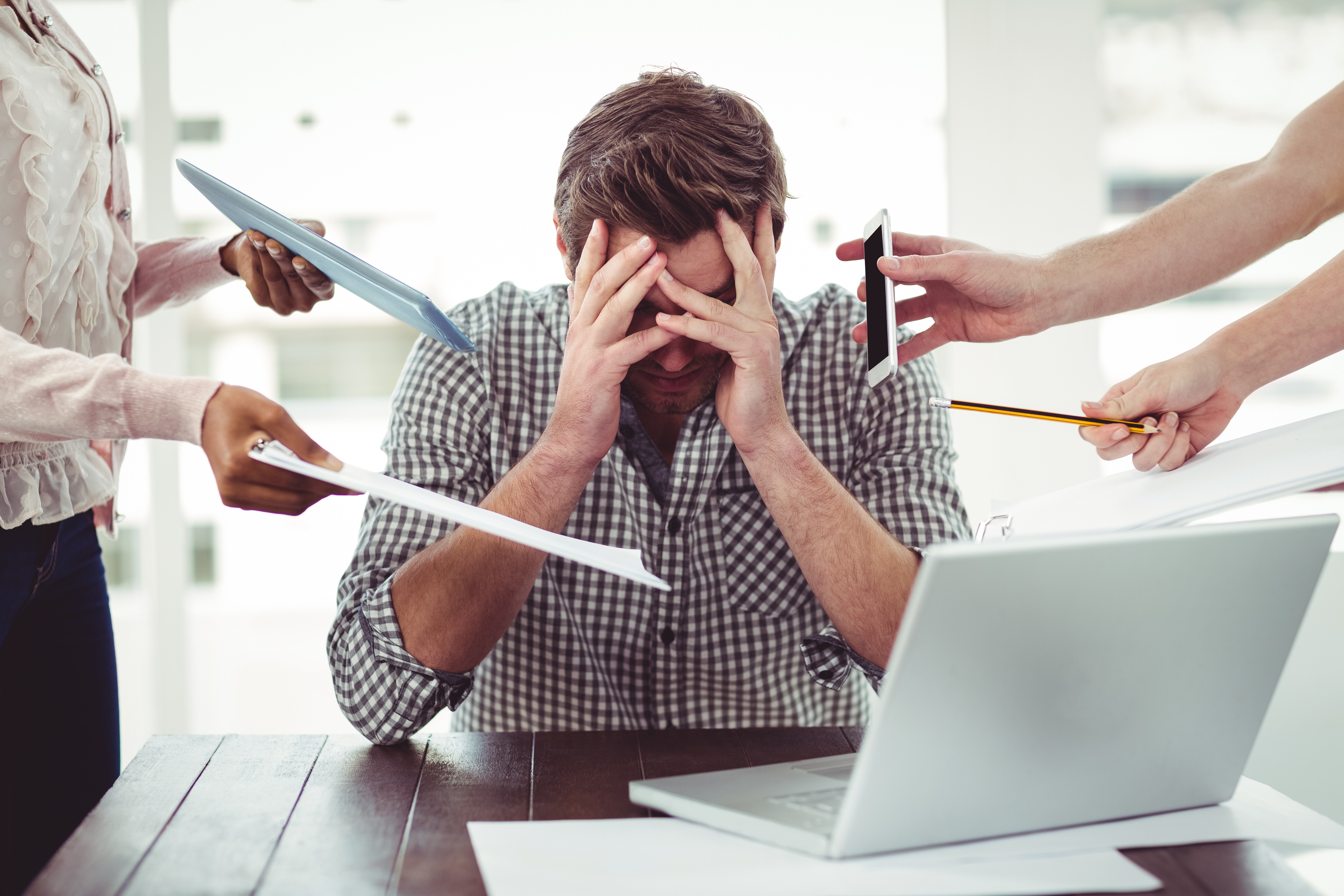 In September I hurt my back. A torn disc, some herniated and bulging discs all proved quite effective at hijacking my life with a ton of pain. It was royally inconvenient! No quick fix, just a lot of rehab, exercise, and patience. I was frustrated. It was a busy season with a significant leadership incline ahead and I had “no time for this!”

A friend called me to check in. I shared what was going on, the diagnosis and prognosis. He then asked “So, what do you think God may want to teach you through this?” Flabbergasted, I responded “It’s a physiological injury, pretty simple. I’m sure something about being patient and waiting, but right now it’s just pain and process.” He replied, “Yes, that makes sense. But you’ve also been pushing pretty hard and tackling a lot lately ... perhaps there’s more to learn from this. I have found that if your back hurts from the load you’re carrying, then you’ve probably been carrying it wrong.” It was NOT what I wanted to hear! In fact, I found it annoying.

Fast forward two months. I’m on a business trip in a series of big meetings. I was pushing through a 15- hour Tuesday that had a lot of good in it but then ended with a series of tough meetings ... people issues, conflict, drama. It was zapping my batteries. I walked out of a meeting at 10 p.m. only to find a couple in tears asking for prayer and I found myself with an empty cup. They shared their burdens. We prayed. God worked through my lack and actually brought Scripture to mind and ministered to them through me to my own surprise. They walked away encouraged. I walked away … drained, exhausted, crushed. Again. Somehow, it was as though the issues of the day had all accumulated into a crushing weight upon ME. Even the burdens of that couple felt like they transferred to me. They walked away free, I walked away heavy.

I found myself restless. I couldn’t just go relax in my hotel room. I was agitated. I ended up walking laps around this hotel in Dallas at 11:30 p.m. ... I began to talk to God ... out loud. I even began to raise my voice at Him! It crescendoed when, describing all that was weighing me down I shouted “I can’t do this! It’s too heavy and I don’t think I can carry all of this, Father!” I sensed a small prompt-like voice, “Say it again.” So, I shouted it even louder with tears now streaming down my face. I completely spooked a poor security guard who was walking around the corner at this point! “Nah, officer, I’m fine, just go about your business. I’m just talking with God right now and don’t need your help.

I cried “uncle!” and God met me there. I needed to. It was real stuff but I was carrying it, and it was wrecking me. I’m not a special agent on assignment from God to do stuff for God out of my strength. I’m invited to an adventure of business WITH God and that is entirely different. Same problems, same reality … different source and experience. The next morning I woke early for my quiet time and my reading plan “just happened” to include Psalm 116. I’m pretty sure David wrote that for me after the last 48 hours!

To be a faith-driven entrepreneur is a wild adventure for sure. The question is…do you approach it with bravado of “saving the world” FOR God, or on assignment with Him? God is already sovereign over everything, so there is no liquidity event He’s waiting on or darling enterprise venture He’s anxiously hoping for; particularly, if it comes at the cost of our soul. A friend of mine, Mindy Caliguire, used to say “I want to get the jet fuel drinkers and candle lighters to come together and understand a high performance leadership journey that is simultaneously dependent, healthy and alive. Leadership does demand sacrifices, but Jesus never asked His disciples to sacrifice their own soul for the cause.”

Jesus responded to people commenting on how preposterous His teachings were by acknowledging that “with man this is impossible, but with God all things are possible.” Sometimes saying “I can’t” is a powerful move. The sooner you get there the better!

Mike is the CEO for The C12 Group, a for-profit operator of peer advisory groups serving Christian CEO/Owners and their Key Players. C12 has grown to serve over 2,500+ members across the US with new chapters in Malaysia, China and Brazil.

Mike nails it with his commentary. God doesn't need you to carry things for Him. He invites you in to take part, but don't confuse that with him laying that burden on you to do alone. His yoke is easy, His burden is light. If you find yourself under a heavy yoke and crushing burden, it is a good time to ask whose it is and who put it there.